When the autocrats for the Jungfru Maria Bebådelsedagsgille SCA event, which was scheduled for 20-22 March in the Shire of Reengarda (about an hour or two south of where I live, in Frostheim (depending on which part of the shire you measure to) made the painful decision to cancel the event on account of pandemic, I promptly sent an email to the King and Queen suggesting that perhaps we could do something in the way of an on-line event, pointing out that I would be happy to put on my costume, sit by the computer (or phone) working on a sewing project and still be able to see everyone, and perhaps they could even do court and give out the awards they had planned. They replied that they were looking into this, that I was not the only one with this crazy idea. A couple of days later I was in the right place online at the right time to hear the Kingdom Seneschal say that she wanted a deputy for facilitating official on-line meetings and courts, so I promptly volunteered, as it seemed like the best way to be certain that I would get my SCA fix and get to see my friends.

This meant for a busy couple of weeks, setting up guidelines as to how it will all work, participating in the test-run court so that the Royals and their herald and the court technician would all know how it would work. Getting things set up took long enough that the court was actually held the Saturday after the event was supposed to happen. However, it wasn’t like any of us had anywhere else to be, so there were still quite a lot of participants in the meeting. Before the meeting their Majesties decided that for this first try at an on-line court they wanted to keep it small, so invitations were sent only to those 70 people who had registered for the event.

The zoom meeting started out informally, with people able to arrive from 15:45, and it was possible for anyone to speak during that pre-court session. Most people had put on costumes for the occasion, and had a video connection. Some people choose not to put on costumes, and thus left their cameras off, and others simply didn’t have a working camera on their end. I was, of course, one of the people in costume, so I connected from my phone, and used my handy phone holder, attached to the arm of the recliner (that I had made to make it easy to sit comfortably, relax and sew during meetings). However, Kjartan and Caroline had chosen not to put on costumes, but they wanted to watch the court on the big screen in the living room, which is wear the recliner is. As soon as he connected his computer to the meeting we got an audible feedback loop from my phone and his computer, so I promptly disconnected my phone audio, but kept my video connection.

When everyone had gathered the Court Technician muted everyone save for the Herald (at his home in Reengarda) and their Majesties (at their home in Gyllengran), and the herald called for all to pay heed to their Majesties, who processed in, and sat down upon their thrones. They then conducted business the same as they would for a normal Drachenwald Court. However, when they called forward someone to receive their award the Court Technician would un-mute that person, so that they could, if they choose to, speak and be heard by the royals and the assembled people.

One of the people to receive an award wasn’t present in the meeting when they were called forth, so the herald read the scroll anyway and Their Majesties asked everyone to keep it a secret until they got a chance to tell the recipient themselves. But, presumably, one of their friends contacted the recipient via a personal message, because a short time later they joined the meeting, and were able to receive the award.

Perhaps this means that if it should happen again that someone isn’t present at an on-line court that the herald can ask if anyone is able to get in touch with the person and ask them to please join, and go on to the next award? Then, if they still haven’t joined by the time the rest of the court business has been conducted the scroll can still be read to make it an official award at the end of court, but if they make it then the herald need only read it one time.

Part way through the court the Court Technician sent me a private message asking about my lack of sound connection. I explained about the feedback loop, and said that if she needed me to say something I could go downstairs. Court had felt like it was drawing to a close, and I was thinking that they might want me to say something during the planned after-court feedback session, in my role as Kingdom Deputy Seneschal responsible for facilitating on-line meetings and courts. She replied with “gärna” (the Swedish phrase used instead of “yes please”), so I picked up my phone and went downstairs. As I was still in the process of sitting down on the floor, and before I could figure out where to set the phone (since downstairs doesn’t have a handy phone holder already set up) the Herald called me forward to receive an award. I was so surprised.

If any of you wish to see the court for yourself, it is available here. I just looked at it, and my award falls between 21 and 25 minutes. The first glimpse of me is while I am still in the process of sitting down, so the image is moving around a fair bit, and I can see that, not only did I cry tears of joy, I must also have bumped my circlet and veil as I went through the curtains to go downstairs, because they are rather rotated to one side. Oops.

Possibly not my prettiest moment in court, but a happy one. One doesn’t expect to be getting arts awards at the Kingdom level when one already has a Laurel. Never mind that, in my case, I got the Laurel without having ever gotten a Kingdom level arts award from any of the (at that point) three Kingdoms I had lived in. I have gotten Kingdom level service awards, for making dance happen, in three of the five Kingdoms in which I have lived, but I moved often enough that I hadn’t gotten arts awards above the Baronial level, and wound up jumping straight to the Laurel, about 18 years after I first joined the SCA.

Getting this particular arts award was even more special to me, because they specify that it was my musical contribution to the Kingdom which prompted it. My laurel, which I got in January of 2000, was for hand-sewing and embroidery, or, as I like to say, “for fidgeting”. But the place I have always loved best to do that fidgeting is at a bardic circle at events. There is something magical for me to gather in costume with friends as we all raise our voices in song, while some of us work on sewing, or nålbindning, or whatever. I love to sing, but, having grown up with a hearing problem, I was never very good at it, not realising that human voices could (and do) hit specific notes. I just thought that singing was words and timing, and that musical instruments were what did notes.

It wasn’t until I was in high school that I found out that I “couldn’t sing”. My beloved best friend was the one who explained to me that I sang in a monotone, and who started me on the path of learning to move my voice up and down to hit various notes. It was a long and difficult path, and I only really started to make good progress on it years after obtaining hearing aids, which I got for the first time when I was 25 years old (and should have had from childhood). While I have always been good at memorising lyrics and the timing/rhythm for songs, these days, sometimes, and if someone helps me start on the correct note, I can actually sing a song correctly, all the way through. Since moving to Frostheim in 2011 I have also obtained a hammer dulcimer, and have learned to play a few tunes, and I love to bring it to an event to share the beautiful sounds of this instrument.

Perhaps this long explication explains why I was moved to tears by being admitted to the Order of the Panache, for trying to share with my friends something that means so much for me.  The scroll was made by Gunnhild von Brunswiek, who tells me that it was inspired by the Book of Hours of the Counts of Manderscheid, Brigge, ca 1515 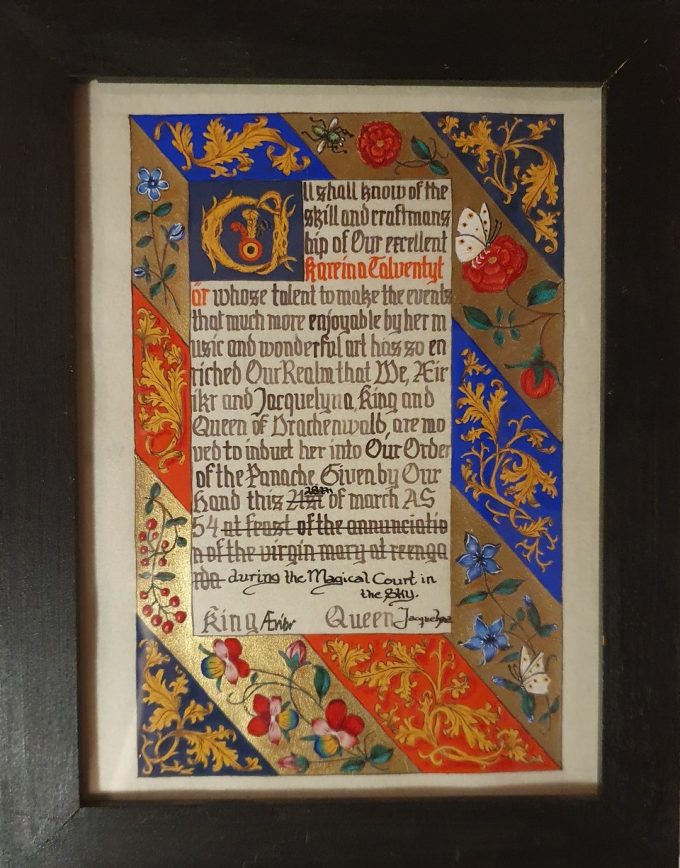 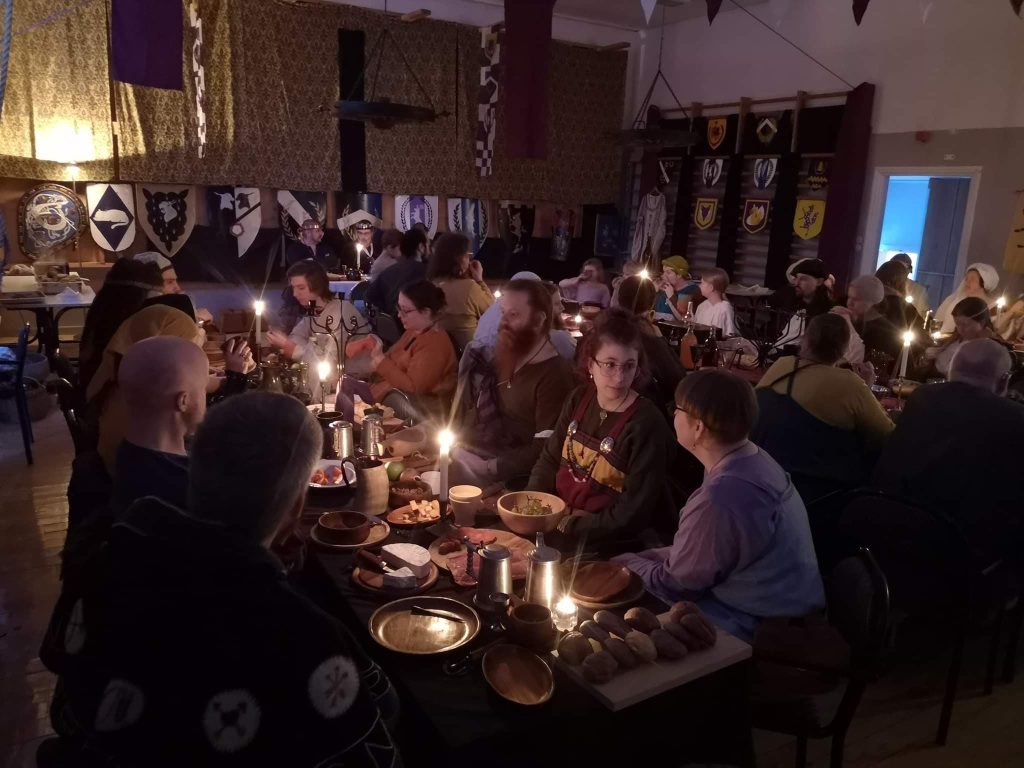