One of the most popular songs to come out of the Norrskensbard competition we hold each year in Norra Nordmark was Otukt, written by Wilhelm Marsson, the current Norrskens Bard.  Princess Jovi so enjoyed the song when he entered it in the competition this year that at the next event she and he were both at, she requested that he perform the song during court.  After which, when he went to return to his post behind her throne the herald instead bid him stay, and she presented him an award, the scroll for which, done by the Princess’s own hand, included the song title in the text.

This song is full of double meanings, and archaic words, so, while I got the gist of it, I didn’t really understand it when he first performed it–my Swedish is good, but it isn’t that good. I didn’t really realise just how much more there was in the song until a mid-winter party, where Kjartan prepared a songbook in advance, and Otkut was included.  During the party my friend Villiam, who is an English teacher, looked at the song, and begun providing me a very flowery-language translation of the text.

The above incidents combined to inspire me to try something silly for Drachenwald 12th Night: Subtitles!  Therefore, with Villiam’s help I first prepared a translation draft for the whole song, then I sat down with Wilhelm and he corrected the translation to better match what he was thinking when he wrote the Swedish lyrics.  Then the real work began…

How To Prepare Subtitles for a Live Bardic Performance

Congratulations! You are now ready to use the subtitles during a performance. You might want several friends to help with the scrolling… 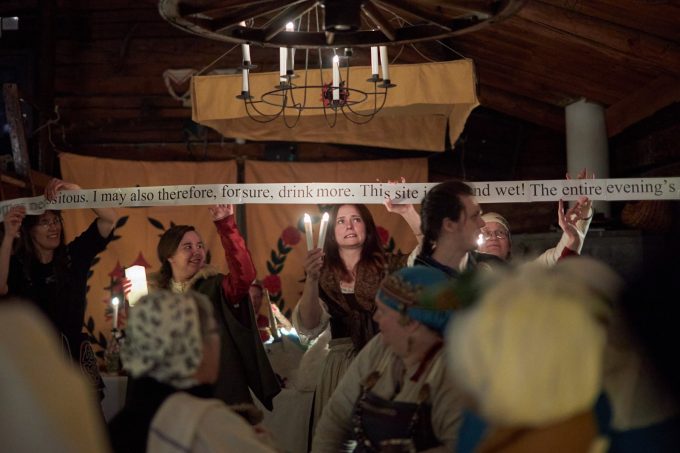 2020-03-28 (English)Jungfru Maria Bebådelsedagsgille was the first SCA event in Drachenwald to be canceled due to the plague, but their were awards to give, so TRM called us to a "Magical Court in the Sky"
Skriven av:

2020-01-05 (English)When performing in Swedish at a Drachenwald Coronation event, with people attending from all over, it is kind to the audience to provide subtitles, so that they can understand the jokes in the song...
Skriven av: